Due to be released at Label Chicago - September 2018 - Quantum Dot labelling technology will be available to the South African market concurrently with the international release.  This innovative ground breaking label printing technology won't be delayed, great news for local manufacturers.

What are quantum dots? 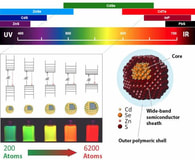 QUANTUM DOTS are nano-size particles of semiconductors with diameter between 2 and 10nm.  They can consist of one element or they can be a mix of some elements.  Nowadays, QUANTUM DOTS with different chemical characteristics and different components exist.  Furthermore QUANTUM DOTS can have a layered structure, where the core is made up of one mixture and the outer shell is comprised of another.  QUANTUM DOTS manufactured by IQDEMY and used in security printing are highly complex.  These layers contain cadmium sulphide (CdS), cadmium selenide (CCdSe) and zinc sulphide (ZnS) and they are placed in a polymeric enclosure (encapsulated).  This is the most widespread type of QUANTUM DOTS. 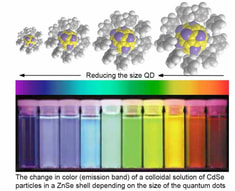 By changing the dot's size it is possible to get various colours i.e. peak emission in the visible and infrared spectrum.  We cannot change the size of the dots ourselves, this is set during the synthesizing process.  IQDEMY is able to produce a colourless varnish coating for print finishing containing these nano-size particles.  QUANTUM DOT particles are produced according to the requirements of the customer in the desired form and spectral range they will need.  This allows the desired colours to be created and visible only under UV light.  This process therefore enables absolutely forgery-proof prints because in the printing process each customer owns his specific wave spectrum used i the manufacture of his colourless varnish containing the nano-size particles which - together with the specialised IQDEMY software - will be defined in consultation with each customer under top secret conditions. 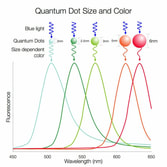 QUANTUM DOTS have monochromatic emission (half peak width 25 - 40nm) meaning that they light up with clear colour differentiation.  Luminophores by contrast, have several peaks in different areas of the spectral range as well as parasitic flashes throughout the spectral range.  This means that Luminophores don't offer such clear colour differentiation.  With the same quant exit, QUANTUM DOTS light up far more intensely than Luminophores because the light emission of dots is concentrated in one area while Luminophores are spread across the entire spectrum.  During the degradation process Luminophores' peaks do not change proportionally, this is why the light emission spectrum of Luminophores will change over time while the composition of the emissions of dots will not.  This also means that the light intensity of QUANTUM DOTS will deteriorate far more slowly over time than in Luminophores.

The simplest detector is the UV flashlight under which both the QUANTUM DOTS and Luminophores light up with different colours.  However, the human eye can't differentiate between QUANTUM DOTS and Luminophores at this level.  Humans will see only the visual effect of a particular colour lighting up.  This still means that a UV flashlight can be used when treating the print as a concealed identifier to verify the authenticity of the product.

Another simple detection device that can be used is a UV flashlight with a built-in photo-detector calibrated for the relevant colour spectrum.  They can be set up to respond to a particular wavelength as well as light intensity at that wavelength.  As a rule, detecting parameters are coded into the device which means that the detector has accurate parameters for detection.  When the device recognises the parameters it is set for it signals to the operator with something like a green light for example.  When the spectrum falls outside of its parameter spec there is simply no response from the device.

The third type is devices requiring a connection to computers and software.  They are spectro-photometers that measure light intensity across the entire spectral range and provide graphs.  They are highly accurate devices and allow for comparing the measured curve against the predefined standard thereby distinguishing original markings from fake ones with virtually 100% accuracy.

More complicated instruments can detect not only parameters of light intensity, but also the forms of marking - meaning it can recognise bar codes, QR codes and other types of marking information that have particular characteristics of light emission.  Such devices are custom made and tend to be more expensive. 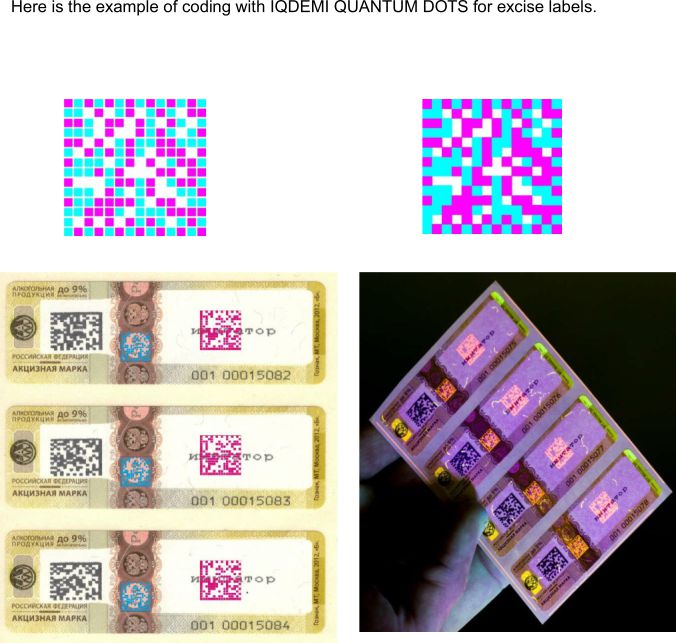 Due to the uniqueness of the nano-particles in the QUANTUM DOT varnish coating solution for each end user, cost-effective measuring devices are under development that will allow these parameters to be queried and thus it can be determined with the utmost accuracy whether a mark is authentic or counterfeit.